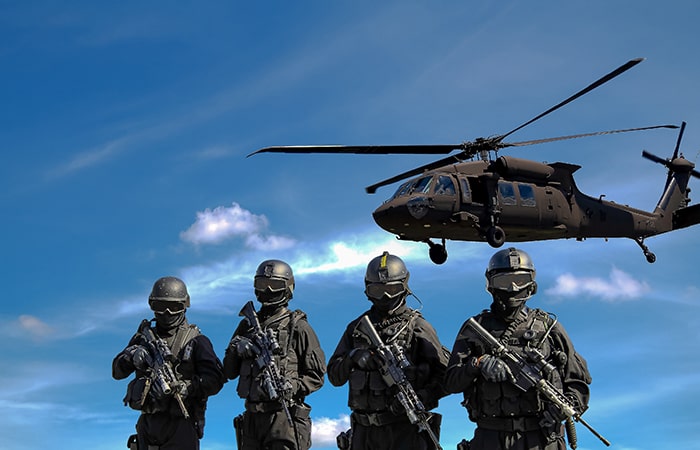 National security or national defence is a function of the national government and refers to the security and defence of a nation state, including its citizens, economy, and institutions. government. Although conventionally conceived as protection against military attack, national security is now widely understood to include also non-military dimensions, including the security from terrorism, minimization of crime, economic security, energy security, environmental security, food security, cyber-security, bio-security and other possible infractions. Similarly, national security risks include, in addition to the actions of other nation states, action by violent non-state actors, by political extremists, fundamentalists, narcotic cartels, and by multinational corporations, and also the effects of natural disasters. Amongst the many tools that Governments rely on to safeguard national security are a range of measures, including political, economic, and military power, as well as diplomacy and consensus building. They may also act to build the conditions of security regionally and internationally by reducing transnational causes of insecurity, such as climate change, economic inequality, political exclusion, and nuclear proliferation. In that light, national security becomes the nation's physical integrity and territory; to maintain its economic relations with the rest of the world on reasonable terms; to preserve its nature, institution, and governance from disruption from outside; and to control its borders. Most governments organize their security policies into a national security strategy. They appoint a National Security Council and a National Security Advisor which is an executive government agency that feeds the head of the state on topics concerning national security and strategic interest. India has such a system of National Security Advisor and National Security Council, currently headed by Shri Ajit Doval. In the case of the United States, the concept of national security became an official guiding principle of foreign policy when the National Security Act of 1947 was signed by U.S. President Harry S. Truman. A military, also known collectively as armed forces, is a heavily armed, highly organized force primarily intended for external warfare. It is typically officially authorized and maintained by a sovereign state, with its members identifiable by their distinct military uniform. It may consist of one or more military branches such as an army, navy, air force, space force, marines, or coast guard. The main task of the military is usually defined as the defence of the state and its interests against external armed threats. The Indian Armed Forces comprise of three professional uniformed services: the Indian Army, Indian Navy, and Indian Air Force. Additionally, the Indian Armed Forces are supported by the Indian Coast Guard and paramilitary organizations (Assam Rifles, and Special Frontier Force) and various inter-service commands and institutions such as the Strategic Forces Command, the Andaman and Nicobar Command and the Integrated Defence Staff. The President of India is the Supreme Commander of the Indian Armed Forces. The Indian Armed Forces are under the management of the Ministry of Defence (MoD) of the Government of India. With strength of about 1.5 million active personnel, it is the world's second-largest military force and has the world's largest volunteer army. It is important to note that the Central Armed Police Forces, which are referred to as 'Paramilitary Forces' comprising of the CRPF, CISF, BSF, ITBP etc are not armed forces. As such they are headed by civilian officers from the Indian Police Service and are under the control of the Ministry of Home Affairs. These are central police organizations or CAPFs. The police too are an executive body of persons empowered by the state to enforce the law to ensure the safety of citizens and overall law and order. Their lawful powers include arrest and the use of force legitimized by the state via the monopoly on violence. The term is most commonly associated with the police forces of a sovereign state that are authorized to exercise the police power of that state within a defined legal or territorial area of responsibility. A police force may also be referred to as a police department, police service, constabulary, gendarmerie, crime prevention, protective services, law enforcement agency, civil guard, or civic guard. Members may be referred to as police officers, troopers, sheriffs, constables, rangers, peace officers or civic/civil guards. Sources- Various, Britannica, Wikipedia.