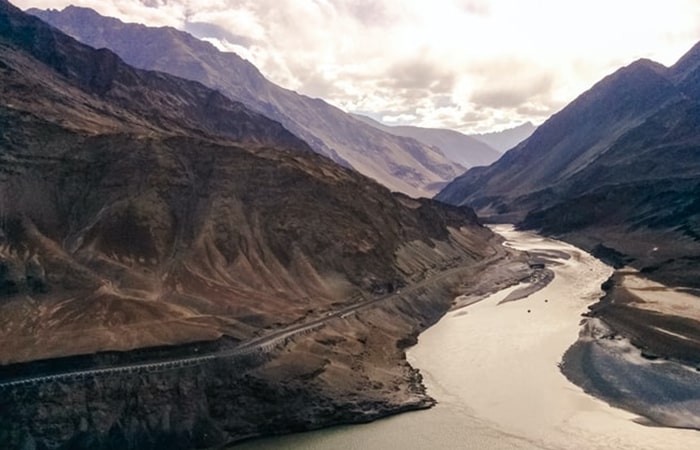 In 2019 Indian Government organized Jammu and Kashmir as a Union Territory (UT) with a legislature; and Ladakh as a separate UT without a legislature. Kashmir is the northernmost geographical region of the Indian subcontinent. Today, Kashmir encompasses a larger area that includes the Indian-administered territories of Jammu and Kashmir and Ladakh, the Pakistani-administered territories of Azad Kashmir and Gilgit-Baltistan, and the Chinese-administered territories of Aksai Chin and the Trans-Karakoram Tract.Ranbir Singh's grandson Hari Singh, who had ascended the throne of Kashmir in 1925, was the reigning monarch in 1947 at the conclusion of British rule of the subcontinent and the subsequent partition of the British Indian Empire into the newly independent Dominion of India and the Dominion of Pakistan. According to Burton Stein's History of India,"Kashmir was neither as large nor as old an independent state as Hyderabad; it had been created rather off-handedly by the British after the first defeat of the Sikhs in 1846, as a reward to a former official who had sided with the British. The Himalayan kingdom was connected to India through a district of the Punjab, but its population was 77 per cent Muslim and it shared a boundary with Pakistan. Hence, it was anticipated that the Maharaja would accede to Pakistan when the British paramountcy ended on 14–15 August. When he hesitated to do this, Pakistan launched a guerrilla onslaught meant to frighten its ruler into submission. Instead the Maharaja appealed to Mountbatten for assistance, and the governor-general agreed on the condition that the ruler accede to India. Indian soldiers entered Kashmir and drove the Pakistani-sponsored irregulars from all but a small section of the state. The United Nations was then invited to mediate the quarrel. The UN mission insisted that the opinion of Kashmiris must be ascertained, while India insisted that no referendum could occur until all of the state had been cleared of irregulars." In the last days of 1948, a ceasefire was agreed under UN auspices. Since then tension has persisted between India and Pakistan, largely over the Kashmir issue, that has been the cause of wars in 1965, 1999 and even the Kargil conflict of 1999.India has control of about half the area of the former princely state of Jammu and Kashmir, which comprises Jammu and Kashmir and Ladakh, while Pakistan controls a third of the region, divided into two provinces, Azad Kashmir and Gilgit-Baltistan. Previously parts of the same State, Jammu and Kashmir and Ladakh are administered by India as union territories since 5 August 2019, after the revocation of the limited autonomy and bifurcation of the StateEver since the first half of the first millennium, the Kashmir region has been an important center of Hinduism and later of Buddhism. In the ninth century, Kashmir Shaivism arose. In 1339, Shah Mir became the first Muslim ruler of Kashmir, inaugurating the Salatin-i-Kashmir or Shah Mir dynasty. The region was part of the Mughal Empire from 1586 to 1751, and thereafter, until 1820, of the Afghan Durrani Empire. That year, the Sikh Empire, under Ranjit Singh, annexed Kashmir. In 1846, after the Sikh defeat in the First Anglo-Sikh War, and upon the purchase of the region from the British under the Treaty of Amritsar, the Raja of Jammu, Gulab Singh, became the new ruler of Kashmir. The rule of his descendants, under the paramountcy (or tutelage) of the British Crown, lasted until the Partition of India in 1947, when the former princely state of the British Indian Empire became a disputed territory, now administered by three countries: India, Pakistan, and China.Ladakh region is a Union Territory of India. It is bordered by the Tibet Autonomous Region to the east, the Indian state of Himachal Pradesh to the south, both the Indian-administered union territory of Jammu and Kashmir and the Pakistan-administered Gilgit-Baltistan to the west, and the southwest corner of Xinjiang across the Karakoram Pass in the far north. It extends from the Siachen Glacier in the Karakoram range to the north to the main Great Himalayas to the south. The eastern end, consisting of the uninhabited Aksai Chin plains, is claimed by the Indian Government as part of Ladakh, and has been under Chinese control since 1962. In August 2019, the Parliament of India passed a law by which Ladakh became a union territory on 31 October 2019. In recent times Ladakh has gained importance from its strategic location at the crossroads of important trade routes, but as the Chinese authorities closed the borders between Tibet Autonomous Region and Ladakh in the 1960s, international trade has dwindled. Since 1974, the Government of India has successfully encouraged tourism in Ladakh. As Ladakh is a part of the strategically important Kashmir region, the Indian military maintains a strong presence in the region.Sources- Various, Britannica, Wikipedia..